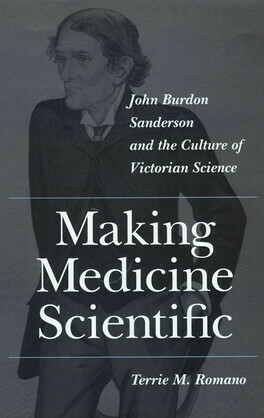 by Terrie M. Romano (Author)
Excerpt
Nonfiction Biography & autobiography Medical Science & technology Medical History Science and technics Science Others History
EPUB
Unlimited loans, One at a time
Details
A biography of the English physician and scientist and a history of the advancement of science in the Victorian era.

In Victorian Britain, scientific medicine encompassed an array of activities, from laboratory research and the use of medical technologies through the implementation of sanitary measures that drained canals and prevented the adulteration of milk and bread. Although most practitioners supported scientific medicine, controversies arose over where decisions should be made, in the laboratory or in the clinic, and by whom—medical practitioners or research scientists. In this study, Terrie Romano uses the life and eclectic career of Sir John Burdon Sanderson (1829-1905) to explore the Victorian campaign to make medicine scientific.

Sanderson, a prototypical Victorian, began his professional work as a medical practitioner and Medical Officer of Health in London, then became a pathologist and physiologist and eventually the Regius Professor of Medicine at Oxford. His career illustrates the widespread support during this era for a medicine based on science. In Making Medicine Scientific, Romano argues this support was fueled by the optimism characteristic of the Victorian age, when the application of scientific methods to a range of social problems was expected to achieve progress. Dirt and disease as well as the material culture of experimentation —from frogs to photographs—represent the tangible context in which Sanderson lived and worked. Romano’s detailed portrayal reveals a fascinating figure who embodied the untidy nature of the Victorian age’s shift from an intellectual system rooted in religion to one based on science.