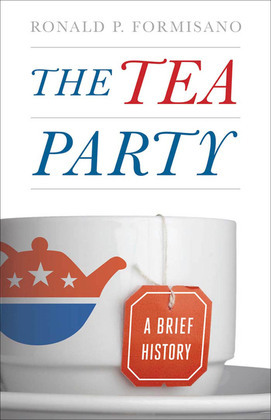 The Tea Party burst on the national political scene in 2009–2010, powered by right-wing grassroots passion and Astroturf big money. Its effect is undeniable, but the message, aims, and staying power of the loosely organized groups seem unclear. In this book, American political historian Ronald P. Formisano probes the rise of the Tea Party movement during a time of economic crisis and cultural change and examines its impact on American politics.

A confederation of intersecting and overlapping organizations, with a strong connection to the Christian fundamentalist Right, the phenomenon could easily be called the Tea Parties. The American media’s fascination with the Tea Party?and the tendency of political leaders embracing the movement to say and do outlandish things?not only helped the movement, but also has diverted attention from its roots, agenda, and the influence it holds over the Republican Party and the American political agenda. Looking at the Tea Party’s claims to historical precedent and patriotic values, Formisano locates its anti-state and libertarian impulses deep in American political culture as well as in recent voter frustrations. He sorts through the goals the movement’s different factions espouse and shows that, ultimately, the contradictions of Tea Party libertarianism reflect those ingrained in the broad mass of the electorate.

Throughout American history, movements have emerged to demand reforms or radical change, only to eventually fade away, even if parts of their programs often are later adopted. Whether the Tea Party endures remains to be seen, but Formisano’s brief history certainly offers clues.
Publication date
May 04, 2021
Publisher
Johns Hopkins University Press
Page count
149
ISBN
9781421406107
Paper ISBN
9781421405964
File size
1 MB