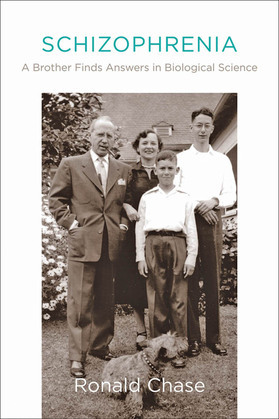 When bright lives are derailed by schizophrenia, bewildered and anxious families struggle to help, and to cope, even as scientists search for causes and treatments that prove elusive. Painful and often misunderstood, schizophrenia profoundly affects people who have the disease and their loved ones. Here Ronald Chase, an accomplished biologist, sets out to discover the facts about the disease and better understand what happened to his older brother, Jim, who developed schizophrenia as a young adult.

Chase’s account alternates between a fiercely loyal and honest memoir and rigorous scientific exploration. He finds scientific answers to deeply personal questions about the course of his brother’s illness. He describes psychiatric practice from the 1950s—when electroconvulsive shock therapy was common and the use of antipsychotic medications was in its infancy—to the development of newer treatments in the 1990s. Current medical and scientific research increases our understanding of genetic and environmental causes of the disease.

Chase also explores the stigma of mental illness, the evolution of schizophrenia, the paradox of its persistence despite low reproduction rates in persons with the disease, and the human stories behind death statistics. With the author’s intimate knowledge of the suffering caused by this disease, Schizophrenia emphasizes research strategies, the importance of sound scientific approaches, and the challenges that remain.