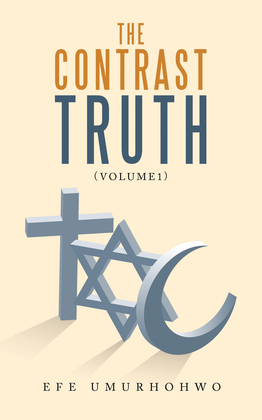 The contrast truth is a religious book of more than one volume, with volume 1 having about 280 pages. the book considered the authenticity of some verses in both the Bible and the Quran in other to establish logical points. This book is necessitated by the level of lack of spiritual knowledge and understanding being displays daily by those who call themselves theologians, Academia, spiritual leaders, religious Apologetics and custodian of God’s word in teachings concerning the one and only true God. It clearly compares statements and stories rendered in both books against the backdrop of the believes held by the adherents of the three major religions in the world. The main purpose of this book is to enlighten every spiritual minded person about the truthfulness of the personality of the one and only true God whom all claim to be worshipping in other to bridge the disparities and abate hatred within the society at large. In this book volume one, the true divinity of Jesus Christ as the Messiah was established with clear evidence from the bible and Quran as references. No one has ever pointed this out in history. This book also points out the inconsistences in both the Quran and the Bible against the existing dogma held by their adherents that both are void of such contradictions. This book consists of controversial questions that raises the consciousness of the reader to a degree of better understanding why questing for the truth. Some of these questions asked were answered in this book while the unanswered one will be answered in the next volume. This book is written with an open mind with a great effort to be free of biasness and prejudice but based only on proves from the Bible and Quran. This makes it suitable for academic purpose. It is a potent weapon for Jews, Christians, and Muslim’s apologetics to have during debates whenever it arises. This book is a must have for every home of Jews, Christians and Muslims who seek knowledge about the true personality of Jesus Christ as recorded by all the prophets before him and how the prophet Muhammad words differ in totality.It is a known fact that cannot be disregarded that all the religions in the world believe that there is God. Therefore, if they all claim to know Him, why do they fight each other’s in the bid of fighting for God when God said He will only have mercy upon whom ever He wills. He does not say His mercy will only be for the Jews neither did he say only for the Christians nor did he say for the Muslims only. Let no man boast that him or her own religion is only the right way less such one perishes in their own ignorance. The only right way is to do the will of God.This book was able to prove that both Christianity and Islam as a Nation were promise fulfilled and are in God’s plan just as Jacob and Esau, Isaac and Ishmael were all in God’s plan of restoration of all things.The accurate knowledge of God is an important integer for one’s salvation. Thus, this book breaks it down to the simplest form for a layman to understand and to be well equipped while contending for his or her faith. In this book, a clear distinction was established between the two classes of Christianity that majority of pastors will never talk to their followers about. This is also a very strange subject most people have not heard of in Christianity.The book clearly shines a light on the difference between Jehovah in the Bible and Allah of the Quran. It also differentiates the Almighty God from the Mighty God in the Bible account with a supporting verse in the Quran which the Muslim Imam, the Christians Pastors and the Jewish Rabbis never thought of or are spiritually blinded to. Finally, the book was concluded with the writer’s submissions and advice for the religious fanatics and extremists of all religions to shun violence in the disguise of fighting God’s fight because at the end God says He will have mercy on whom He will irrespective of ones religion.