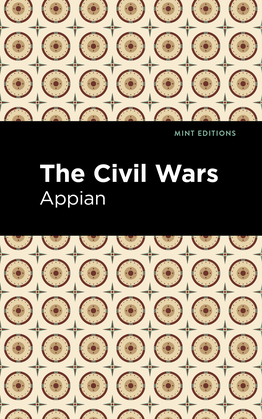 The Civil Wars (c. 150) is a work of political and military history by Appian. Written toward the end of his career as a leading advocate in Rome, The Civil Wars is comprised of books 13-17 of The Roman History, Appian’s 24-book study of the Roman Republic and Empire. Appian’s work has long been considered essential by classical scholars and historians alike, providing an effective and largely objective overview of the most turbulent period in the history of Rome. In the decades after the assassinations of the Gracchi brothers—tribunes who attempted to enact sweeping reforms in favor of the poor and veterans—the Roman Republic erupts in a series of violent civil wars. From 88-81 BC, Sullan and Marian forces waged two wars dividing the country between the Optimates—Sulla’s political faction—and the Populares, controlled by Marius. In 81 BC, the victorious Sulla declared himself Dictator of the Republic, leading to a period of executions and political repression of those declared enemies of the state. Years later, in 60 BC, the First Triumvirate between Caesar, Crassus, and Pompey shifts power from the Optimates back to the Populares, creating tension between the Roman Senate and the Republic’s leading generals and elected officials. As Caesar’s military victories and acquisition of new territories give him increasing power and popularity, Pompey aligns himself with the Senate. In an act of stunning defiance, Caesar crosses the Rubicon with his army in 49 BC, setting off a four-year civil war that will conclude with Caesar declaring himself Dictator for life, virtually ending the Roman Republic after nearly five centuries of existence. Accessible and elegantly paced, Appian’s The Civil Wars is an invaluable work from one of the Roman Empire’s leading historians. With a beautifully designed cover and professionally typeset manuscript, this edition of Appian’s The Civil Wars is a classic of Roman history reimagined for modern readers.