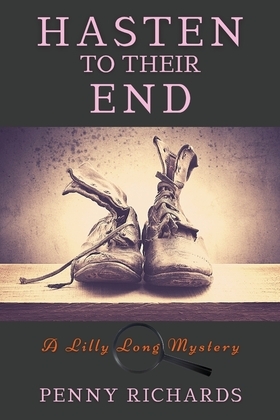 Hasten to Their End

Is It Time to Exit the Stage?

A close brush with death in Texas has left Pinkerton agent Lilly Long wondering if the demands of the job she wanted so badly are more than she can mentally and physically endure without becoming cold and uncaring. Instead of allowing her time to reflect on her future, William Pinkerton sends her to hone her skills with renowned self-defense master, Colonel Thomas Hoyer Monstery, and when she and her partner, Cadence McShane, are summoned for a new assignment, she goes, despite her reservations.

Their mission is close to home-just across the city-and it seems simple enough on the surface: determine if pedestrian promoter and manager J.D. Ames's death was the suicide the police claimed, or if it was murder by one of those connected with the sport, as his wife, Dora, suspects. To learn the truth, Lilly and Cade must become part of the community of endurance walkers who undertake to walk a specified number of miles in a specified time.

Lilly, straight from her training with Monstery, will infiltrate the close community as Irish competitor, Lil McShane, and Cade will be her brother and trainer, Andrew. It doesn't take long to recognize the antagonism, aggression, and rivalry among both the established walkers and the new ones, hoping to make a name for themselves. How can they possibly solve a murder when there is so much conflict both on and off the track? Can Lilly learn anything useful while immersing herself in a role that seems designed to physically reduce the competitors to shadows of themselves while crushing their spirits and stealing their dreams?