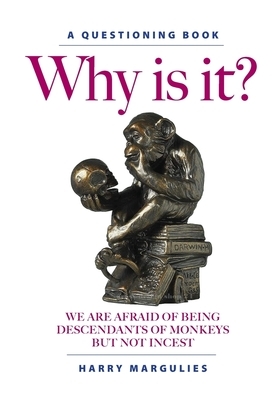 Why Is It ... We are Afraid of Being Descendants of Monkeys but Not Incest?

WHAT IS YOUR ANSWER

As the Corona pandemic spreads, with suffering and death rampant around the whole world, believers started praying for divine help to alleviate the suffering and to put a stop to the nightmare. Almost never was the logical somersault and mental Catch-22 questioned when of course if God really existed, he could have prevented it all.

This is just one among the many dramatic and exposing questions asked in this book, Why is it. Another question deals with how humanity came to be.

Why is it that believers cannot agree that we have a common ancestry with the monkeys but rather accept that we descend from incest?

Could it really be that God who is all-knowing, all-seeing and all-powerful could in any way be surprised at the outcome of his creation?

What is the difference between what we have been taught to believe and what our holy texts really say?

Are religious institutions here for God and his worshipers or perhaps more for the benefit their own existence and that of their leaders?

If Jesus was sent to earth by his Father to die on the cross for our sins, was His crucifixion not godly suicide?

Why is it... is about the difficult questions about religion, religious institutions and religious figures. Each of the 12 chapters of the book is a separate question being asked and followed up by a discussion that can help you with your own inquiry.

Harry Margulies, the author, is known for his pronounced analytical abilities and ambition to think outside the box. That is how he finds different avenues to difficult subject matters which the rest of us, often perhaps through discomfort, choose to ignore.