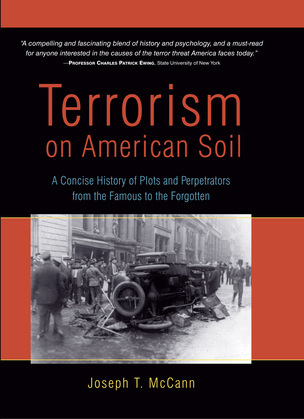 From the assassination of Abraham Lincoln to 9/11 and beyond, this riveting case study examines the history of American terror attacks.

To many Americans, the terrorist attacks of September 11, 2001, seemed to usher in a new era in which we faced a new kind of threat. But in truth, terrorist attacks had always been a part of American life. This book chronicles thirty-seven such assaults on American soil from the end of the Civil War into the twenty-first century. Author Joseph T. McCann covers the most infamous attacks as well as obscure yet important events.

Using a narrative case-study format, Terrorism on American Soil provides detailed accounts of the perpetrators, their motives, and the social and political context in which the events took place. Taken together, these accounts reveal important lessons about the changing nature of terrorism in America; our evolving methods for coping with it; and the psychological, political, and legal principles that help us understand it.
Publication date
August 04, 2021
Publisher
Sentient Publications
Page count
336
ISBN
9781591812234
Paper ISBN
9781591810490