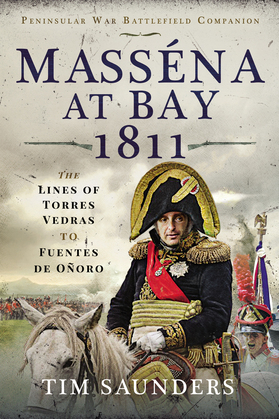 The 1810 French invasion of Portugal, commanded by the veteran marshal André Masséna, who was known to Napoleon as the ‘Spoilt Child of Victory’ has been well covered by historians. Conversely, the shock revelation of the presence of the Lines of Torres Vedras baring the French Army of Portugal’s way to their objective of Lisbon, and numerous combats through to the Battle of Funtes de Oñoro, has been frequently and unjustifiably glossed over.

This book, starting with the occupation of the Lines of Torres Vedras, which were at the heart of Wellington’s Peninsular strategy from October 1809-1812, is the story of Wellington’s pursuit of Masséna back to Spain. This was a time when the Peninsular Army was still being forged and Wellington was refining his own art of war. In addition, 1810-1811 was a period when the outcome of the struggle in Iberia was still far from certain, and Wellington could not manoeuvre with the same confidence in the outcome as he could in future years.

The series of combats fought at Pombal, Redhina, Foz da Arounce and Sabugal while Masséna was at bay, though not categorised as ‘general actions’, were of the same scale and significance as those of 1808; Roliça and Vimiero. The general action at Funtes de Oñoro was one of the most significant of Wellington’s victories, but he confessed that ‘If Bony had been here we would have been beat’.