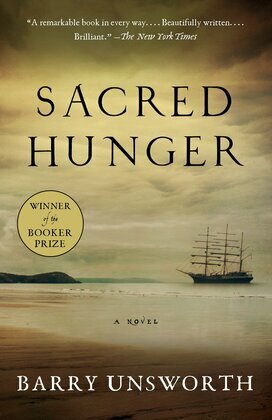 by Barry Unsworth (Author)
Excerpt
Fiction Historical Literary Christian Historical
warning_amber
One or more licenses for this book have been acquired by your organisation details
EPUB
Unlimited loans, 2 years, One at a time
Details

Winner of the Booker Prize

A historical novel set in the eighteenth century, Sacred Hunger is a stunning, engrossing exploration of power, domination, and greed in the British Empire as it entered fully into the slave trade and spread it throughout its colonies. Barry Unsworth follows the failing fortunes of William Kemp, a merchant pinning his last chance to a slave ship; his son who needs a fortune because he is in love with an upper-class woman; and his nephew who sails on the ship as its doctor because he has lost all he has loved. The voyage meets its demise when disease spreads among the slaves and the captain's drastic response provokes a mutiny. Joining together, the sailors and the slaves set up a secret, utopian society in the wilderness of Florida, only to await the vengeance of the single-minded, young Kemp.