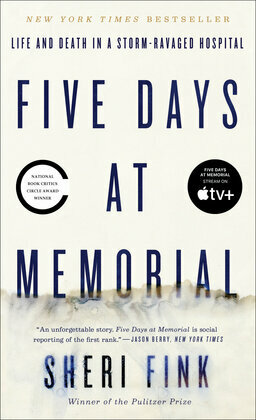 Five Days at Memorial: Life and Death in a Storm-Ravaged Hospital

“An amazing tale, as inexorable as a Greek tragedy and as gripping as a whodunit.”—Dallas Morning News

After Hurricane Katrina struck and power failed, amid rising floodwaters and heat, exhausted staff at Memorial Medical Center designated certain patients last for rescue. Months later, a doctor and two nurses were arrested and accused of injecting some of those patients with life-ending drugs.

Five Days at Memorial, the culmination of six years of reporting by Pulitzer Prize winner Sheri Fink, unspools the mystery, bringing us inside a hospital fighting for its life and into the most charged questions in health care: which patients should be prioritized, and can health care professionals ever be excused for hastening death?

Transforming our understanding of human nature in crisis, Five Days at Memorial exposes the hidden dilemmas of end-of-life care and reveals how ill-prepared we are for large-scale disasters—and how we can do better.