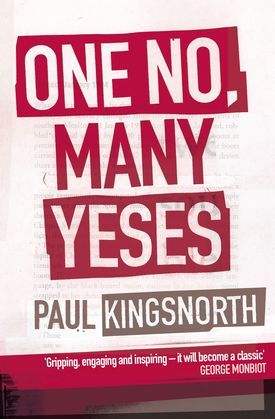 One No, Many Yeses: A Journey to the Heart of the Global Resistance Movement

From the 2014 Man BookerPrizelonglisted author comes an impassioned journey to the heart of the Global Resistance Movement.

It could turn out to be the biggest political movement of the twenty-first century: a global coalition of millions, united in resisting an out-of-control global economy, and already building alternatives to it. It emerged in Mexico in 1994, when the Zapatista rebels rose up in defiance of the North American Free Trade Agreement. The West first noticed it in Seattle in 1999, when the World Trade Organisation was stopped in its tracks by 50,000 protesters. Since then, it has flowered all over the world, every month of every year. The 'anti-capitalist' street protests we see in the media are only the tip of its iceberg. It aims to shake the foundations of the global economy, and change the course of history.

But what exactly is it? Who is involved, what do they want, and how do they aim to get it? To find out, Paul Kingsnorth travelled across four continents to visit some of the epicentres of the movement. In the process, he was tear-gassed on the streets of Genoa, painted anti-WTO puppets in Johannesburg, met a tribal guerrilla with supernatural powers, took a hot bath in Arizona with a pie-throwing anarchist and infiltrated the world's biggest gold mine in New Guinea.