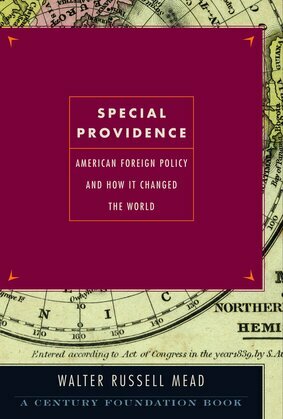 Special Providence: American Foreign Policy and How It Changed the World

From one of our leading experts on foreign policy, a full-scale reinterpretation of America’s dealings—from its earliest days—with the rest of the world.

It is Walter Russell Mead’s thesis that the United States, by any standard, has had a more successful foreign policy than any of the other great powers that we have faced—and faced down. Beginning as an isolated string of settlements at the edge of the known world, this country—in two centuries—drove the French and the Spanish out of North America; forced Britain, then the world’s greatest empire, to respect American interests; dominated coalitions that defeated German and Japanese bids for world power; replaced the tottering British Empire with a more flexible and dynamic global system built on American power; triumphed in the Cold War; and exported its language, culture, currency, and political values throughout the world.

Yet despite, and often because of, this success, both Americans and foreigners over the decades have routinely considered American foreign policy to be amateurish and blundering, a political backwater and an intellectual wasteland.

Now, in this provocative study, Mead revisits our history to counter these appraisals. He attributes this unprecedented success (as well as recurring problems) to the interplay of four schools of thought, each with deep roots in domestic politics and each characterized by a central focus or concern, that have shaped our foreign policy debates since the American Revolution—the Hamiltonian: the protection of commerce; the Jeffersonian: the maintenance of our democratic system; the Jacksonian: populist values and military might; and the Wilsonian: moral principle. And he delineates the ways in which they have continually, and for the most part beneficially, informed the intellectual and political bases of our success as a world power. These four schools, says Mead, are as vital today as they were two hundred years ago, and they can and should guide the nation through the challenges ahead.

Special Providence is a brilliant analysis, certain to influence the way America thinks about its national past, its future, and the rest of the world.