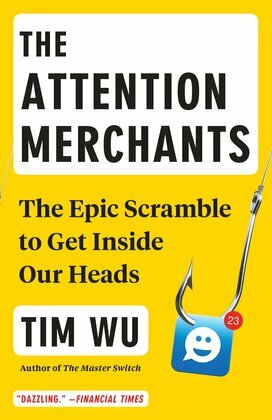 The Attention Merchants: The Epic Scramble to Get Inside Our Heads

by Tim Wu (Author)
Excerpt
Nonfiction Business & economics Industries Media & communications industries Social science Sociology History Other Social history
warning_amber
One or more licenses for this book have been acquired by your organisation details
EPUB
Unlimited loans, 2 years, One at a time
Details

From the author of the award-winning The Master Switch, who coined the term "net neutrality”—a revelatory, ambitious and urgent account of how the capture and re-sale of human attention became the defining industry of our time.

Ours is often called an information economy, but at a moment when access to information is virtually unlimited, our attention has become the ultimate commodity. In nearly every moment of our waking lives, we face a barrage of efforts to harvest our attention. This condition is not simply the byproduct of recent technological innovations but the result of more than a century's growth and expansion in the industries that feed on human attention.

Wu’s narrative begins in the nineteenth century, when Benjamin Day discovered he could get rich selling newspapers for a penny. Since then, every new medium—from radio to television to Internet companies such as Google and Facebook—has attained commercial viability and immense riches by turning itself into an advertising platform. Since the early days, the basic business model of “attention merchants” has never changed: free diversion in exchange for a moment of your time, sold in turn to the highest-bidding advertiser.

Full of lively, unexpected storytelling and piercing insight, The Attention Merchants lays bare the true nature of a ubiquitous reality we can no longer afford to accept at face value.