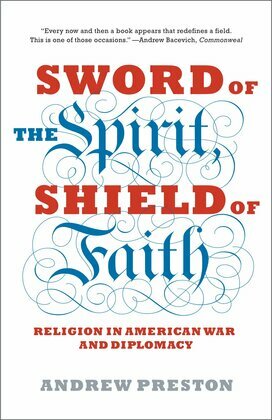 Sword of the Spirit, Shield of Faith: Religion in American War and Diplomacy

A richly detailed, profoundly engrossing story of how religion has influenced American foreign relations, told through the stories of the men and women—from presidents to preachers—who have plotted the country’s course in the world.

Ever since John Winthrop argued that the Puritans’ new home would be “a city upon a hill,” Americans’ role in the world has been shaped by their belief that God has something special in mind for them. But this is a story that historians have mostly ignored. Now, in the first authoritative work on the subject, Andrew Preston explores the major strains of religious fervor—liberal and conservative, pacifist and militant, internationalist and isolationist—that framed American thinking on international issues from the earliest colonial wars to the twenty-first century. He arrives at some startling conclusions, among them: Abraham Lincoln’s use of religion in the Civil War became the model for subsequent wars of humanitarian intervention; nineteenth-century Protestant missionaries made up the first NGO to advance a global human rights agenda; religious liberty was the centerpiece of Franklin Roosevelt’s strategy to bring the United States into World War II.

From George Washington to George W. Bush, from the Puritans to the present, from the colonial wars to the Cold War, religion has been one of America’s most powerful sources of ideas about the wider world. When, just days after 9/11, George W. Bush described America as “a prayerful nation, a nation that prays to an almighty God for protection and for peace,” or when Barack Obama spoke of balancing the “just war and the imperatives of a just peace” in his Nobel Peace Prize acceptance speech, they were echoing four hundred years of religious rhetoric. Preston traces this echo back to its source.

Sword of the Spirit, Shield of Faith is an unprecedented achievement: no one has yet attempted such a bold synthesis of American history. It is also a remarkable work of balance and fair-mindedness about one of the most fraught subjects in America.