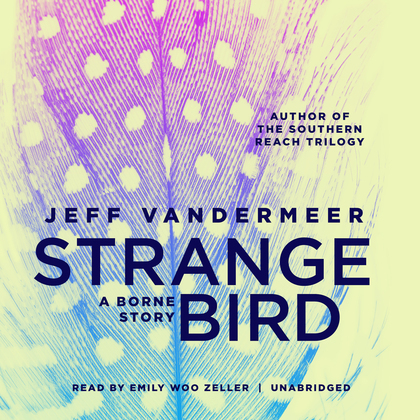 A Borne Story
by Jeff VanderMeer (Author), Emily Woo Zeller (Narrateur)
Excerpt
Fiction Fantasy Science fiction
warning_amber
One or more licenses for this book have been acquired by your organisation details
AUDIOBOOK
Unlimited loans, One at a time
Details

The Strange Bird is a new kind of creature, built in a laboratory—she is part bird, part human, part many other things. But now the lab in which she was created is under siege, and the scientists have turned on their animal creations. Flying through tunnels, dodging bullets, and changing her colors and patterning to avoid capture, the Strange Bird manages to escape.

But she cannot just soar in peace above the earth. The sky itself is full of wildlife that rejects her as one of their own, and also full of technology—satellites and drones and other detritus of the human civilization below that has all but destroyed itself. And the farther she flies, the deeper she finds herself in the orbit of the Company, a collapsed biotech firm that has populated the world with experiments both failed and successful that have outlived the corporation itself: a pack of networked foxes, a giant predatory bear. But of the many creatures she encounters with whom she bears some kind of kinship, it is the humans—all of them now simply scrambling to survive—who are the most insidious, who still see her as simply something to possess, to capture, to trade, to exploit. Never to understand, never to welcome home.

With The Strange Bird, Jeff VanderMeer has done more than add another layer to his celebrated novel Borne. He has created a whole new perspective on the world inhabited by Rachel and Wick, the Magician, Mord, and Borne—a view from above, of course, but also a view from deep inside the mind of a creature who will fight and suffer and live for the tenuous future of this world.