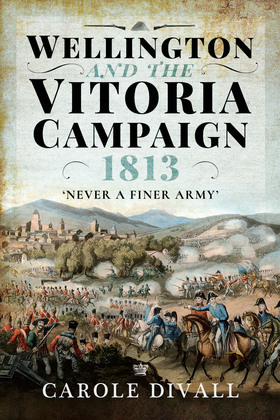 Wellington and the Vitoria Campaign 1813

Never a Finer Army
by Carole Divall (Author)
Excerpt
Nonfiction History History by country Europe Spain
warning_amber
One or more licenses for this book have been acquired by your organisation details
EPUB
Unlimited loans, One at a time
Details
EPUB
40 loans, 10 Concurrent loans
Details

Over two hundred years ago, on 21 June 1813, just southwest of Vitoria in northern Spain, the British, Portuguese and Spanish army commanded by the Duke of Wellington confronted the French army of Napoleon’s brother Joseph. Hours later Wellington’s forces won an overwhelming victory and, after six years of bitter occupation, the French were ousted from Iberia. This is the critical battle that Carole Divall focuses on in this vivid, scholarly study of the last phase of the Peninsular War.

The battle was the pivotal event of the 1813 campaign - it was fatal to French interests in Spain - but it is also significant because it demonstrated Wellington’s confidence in his allied army and in himself. The complexity of the manoeuvres he expected his men to carry out and the shrewd strategic planning that preceded the battle were quite remarkable.

As well as giving a graphic close description of each stage of the battle, Carole Divall sets it in the wider scope of the Peninsular War. Through the graphic recollections of the men who were there – from commanders to the merest foot soldiers – she offers us a direct insight into the reality of combat during the Napoleonic Wars.