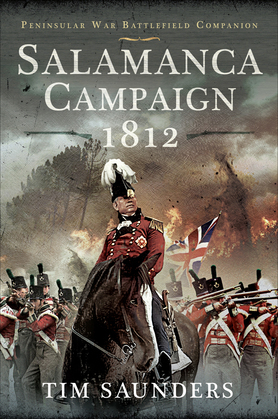 by Tim Saunders (Author)
Excerpt
Nonfiction History History by country Europe Spain
warning_amber
One or more licenses for this book have been acquired by your organisation details
EPUB
Unlimited loans, One at a time
Details
EPUB
40 loans, 10 Concurrent loans
Details

After a gap of two years, the 1812 Salamanca Campaign saw Wellington taking the offensive in Spain against Marshal Marmont’s Army of Portugal. Marching from the border fortress of Ciudad Rodrigo which fell to the Allies in January, neither commander was willing to take the risk of a general action without a clear tactical advantage. The result were stand-offs as Wellington offered battle on the San Christóbal Heights, but once the small French-garrisoned forts left behind in Salamanca fell, Marmont withdrew to the Douro. For over a week the two armies shared cooling waters of the river before Marmont ‘humbugged’ Wellington and fell on the Allied left flank at Castrejón. Wellington rushed to the aid of the Light and 4th divisions with the heavy cavalry. Over the following days Marmont dexterously manoeuvred Wellington back towards Salamanca, with both armies within cannon shot still not risking battle.

When it seemed Wellington would have to march back to the safety of Portugal, Marmont finally made a mistake on the plains south of Salamanca on 22 July 1812, by allowing his army to become over extended. Wellington saw what was happening and after weeks of marching and counter marching, the battle the soldiers earnestly hoped for was on.

In the past it has been difficult to place the fighting on the ground in the centre of the Salamanca battlefield, where ‘vast clouds of smoke and dust that rolled along the basin’ obscured vision even for those fighting. Supplementing their letters, diaries and memoires with modern geographical aids, archaeology and a stout pair of boots, it is now possible to reconcile the sequence of the battle with locations, in a way in which it was not feasible even a few years ago.