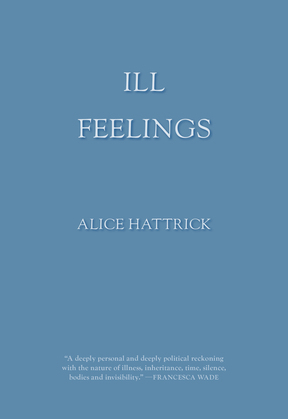 by Alice Hattrick (Author)
Excerpt
Nonfiction Biography & autobiography Medical Personal memoirs Social science Social work Sociology
warning_amber
One or more licenses for this book have been acquired by your organisation details
EPUB
Unlimited loans, One at a time
Details

An intrepid, galvanizing meditation on illness, disability, feminism, and what it means to be alive.

In 1995 Alice’s mother collapsed with pneumonia. She never fully recovered and was eventually diagnosed with ME, or Chronic Fatigue Syndrome. Then Alice got ill. Their symptoms mirrored their mother’s and appeared to have no physical cause; they received the same diagnosis a few years later. Ill Feelings blends memoir, medical history, biography and literary nonfiction to uncover both of their case histories, and branches out into the records of ill health that women have written about in diaries and letters. Their cast of characters includes Virginia Woolf and Alice James, the poets Elizabeth Barrett Browning and Emily Dickinson, John Ruskin’s lost love Rose la Touche, the artist Louise Bourgeois and the nurse Florence Nightingale. Suffused with a generative, transcendent rage, Alice Hattrick’s genre-bending debut is a moving and defiant exploration of life with a medically unexplained illness.