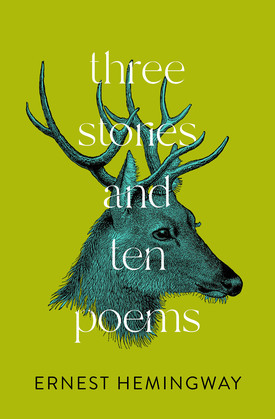 by Ernest Hemingway (Author)
Excerpt
Nonfiction Literary collections American
warning_amber
One or more licenses for this book have been acquired by your organisation details
EPUB
Unlimited loans, One at a time
Details

This first literary collection from the Nobel Prize–winning author of The Sun Also Rises contains some of his earliest work.

Three Stories and Ten Poems was originally published in a small print run in Paris in 1923. Of this collection’s three stories, two are all that remained after a suitcase containing his manuscripts was stolen in the Gare de Lyon, while the third was written the previous year in Italy. Their tight, economical prose is typical of Hemingway’s style. Each story explores themes found in the author’s later work, like masculinity and finding solace in alcohol, sports, and the outdoors.

In “Up in Michigan,” a small-town waitress finds herself falling for the new man who has just bought the local smithy. In “Out of Season,” an American ex-pat living in northern Italy takes his wife on a fishing trip. And in “My Old Man,” the son of a jockey comes of age in the world of European horse racing. This collection also features ten poems, such as “Champs d’Honneur,” “Montparnasse,” and “Along with Youth.”
Publication date
January 01, 2022
Publisher
Open Road Media
Page count
72
ISBN
9781504073745
File size
1 MB
4399365
item