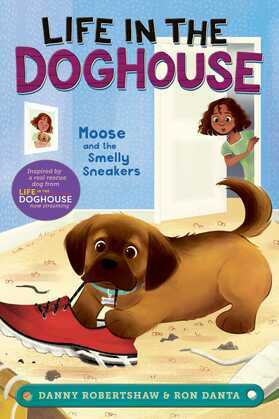 Moose and the Smelly Sneakers

Inspired by a real dog from Danny & Ron’s Rescue from the popular documentary, Life in the Doghouse, this second book in a sweet chapter book series follows an irrepressible puppy who’s hard to train—a great fit for fans of W. Bruce Cameron’s Puppy Tales series.

Moose is an adorable loaf-like puppy who loves his new home with Rosa and her family. And one of his favorite things to do is explore all of the scents in the house, from forgotten snacks to new toys to extra-smelly sneakers. But his family seems to have lots of rules that he doesn’t understand, and “no” is quickly becoming his least favorite word.

Rosa had been asking her parents to get a puppy for years, and they finally agreed on two conditions: that she help train and care for him, and that she works to improve her grade in science. But Moose doesn’t seem to understand any of the words Rosa tries to teach him, and she has no idea what topic to pick for her science project. That is, until she has an idea for how to turn her project into a way to solve both her and Moose’s problems with training at the same time.