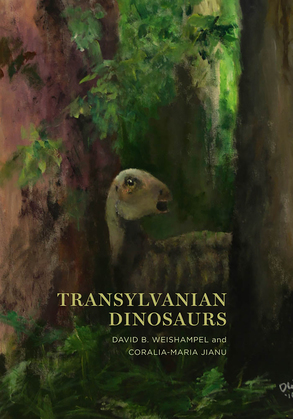 The history and science of a cluster of dinosaurs found in the Hungarian region and the story of the aristocrat who discovered them.

At the end of the time of the dinosaurs, Transylvania was an island in what was to become southeastern Europe. The island’s limited resources affected the size and life histories of its animals, resulting in a local dwarfism. For example, sauropods found on the island measured only six meters long, while their cousins elsewhere grew up to five times larger. Here, David B. Weishampel and Coralia-Maria Jianu present unique evolutionary interpretations of this phenomenon.

The authors bring together the latest information on the fauna, flora, geology, and paleogeography of the region, casting these ancient reptiles in their phylogenetic, paleoecological, and evolutionary contexts. What the authors find is that Transylvanian dinosaurs experienced a range of unpredictable successes as they evolved.

Woven throughout the detailed history and science of these diminutive dinosaurs is the fascinating story of the man who first discovered them, the mysterious twentieth-century paleontologist Franz Baron Nopcsa, whose name is synonymous with Transylvanian dinosaurs. Hailed by some as the father of paleobiology, it was Nopcsa alone who understood the importance of the dinosaur discoveries in Transylvania; their story cannot be told without recounting his.

Transylvanian Dinosaurs strikes an engaging balance between biography and scientific treatise and is sure to capture the imagination of professional paleontologists and amateur dinophiles alike.

“It is rare to find a book on dinosaurs so literate, well-written, and full of insight and synthesis—particularly when the dinosaurs are so unusual. The authors lay them out for us, situate them beautifully in time, space, and cultural history, and then reassemble them and their world using all the tools of modern science. The result is a tour de force.” —Kevin Padian, University of California Museum of Paleontology

“A fine example of something I always try, but rarely succeed, to articulate to colleagues in paleontology, evolutionary biology, and geology who don’t work on dinosaurs. Dinosaurs, within the context of their ecosystems and paleogeography, can tell us many neat things about how evolution works over long time scales.” —Stephen Brusatte, Priscum