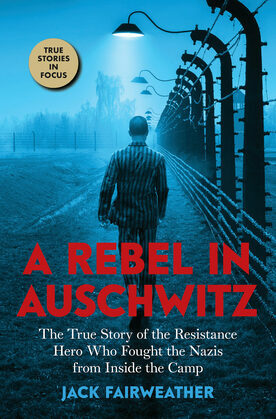 A Rebel in Auschwitz: The True Story of the Resistance Hero who Fought the Nazis from Inside the Camp (Scholastic Focus)

de Jack Fairweather (Autor)
Extracto
warning_amber
One or more licenses for this book have been acquired by your organisation details
EPUB
55 préstamos, Uno a la vez
Detalles
With exclusive access to previously hidden diaries, family and camp survivor accounts, and recently declassified files, critically acclaimed and award-winning journalist Jack Fairweather brilliantly portrays the remarkable man who volunteered to face the unknown in the name of truth and country. This extraordinary and eye-opening account of the Holocaust invites us all to bear witness.

Witold Pilecki, a Polish underground operative, accepted a mission to uncover the fate of thousands interned at a new concentration camp, report on Nazi crimes, raise a secret army, and stage an uprising. The name of the camp -- Auschwitz.

Over the next two and half years, and under the cruelest of conditions, Pilecki's underground sabotaged facilities, assassinated Nazi officers, and gathered evidence of terrifying abuse and mass murder. But as he pieced together the horrifying Nazi plans to exterminate Europe's Jews, Pilecki realized he would have to risk his men, his life, and his family to warn the West before all was lost. To do so meant attempting the impossible -- but first he would have to escape from Auschwitz itself...