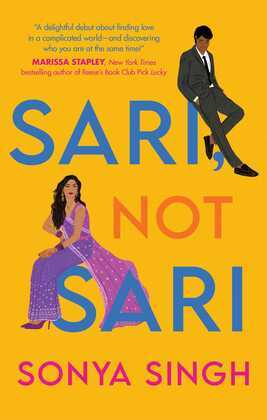 This delightful debut rom-com follows the adventures of a woman trying to connect with her South Asian roots and introduces readers to a memorable cast of characters in a veritable feast of food, family traditions, and fun.

Manny Dogra is the beautiful young CEO of Breakup, a highly successful company that helps people manage their relationship breakups. As preoccupied as she is with her business, she’s also planning her wedding to handsome architect Adam Jamieson while dealing with the loss of her beloved parents.

For reasons Manny has never understood, her mother and father, who were both born in India, always wanted her to become an “All-American” girl. So that’s what she did. She knows next to nothing about her South Asian heritage, and that’s never been a problem—until her parents are no longer around, and an image of Manny that’s been Photoshopped to make her skin look more white appears on a major magazine cover. Suddenly, the woman who built an empire encouraging people to be true to themselves is having her own identity crisis.

But when an irritating client named Sammy Patel approaches Manny with an odd breakup request, the perfect solution presents itself: If they both agree to certain terms, he’ll give her a crash course in being “Indian” at his brother’s wedding.

What follows is days of dancing and dal, masala and mehndi as Manny meets the lovable, if endlessly interfering, aunties and uncles of the Patel family, and, along the way, discovers much more than she could ever have anticipated.