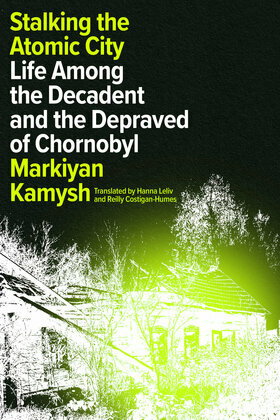 Life Among the Decadent and the Depraved of Chornobyl
by Markiyan Kamysh (Author), Hanna Leliv (Translator), Reilly Costigan-Humes (Translator)
Excerpt
Nonfiction History History by country Europe Russia Social science Disasters & disaster relief Science and technics Technology & engineering Energy Nuclear
warning_amber
One or more licenses for this book have been acquired by your organisation details
EPUB
Unlimited loans, One at a time
Details

“His is a voice that must be heard.” —Patti Smith

“A poetic rush to madness. . . a stunning, original voice as lyrical as it is unnerving."
—Alan Weisman, author of The World Without Us and Countdown

"In the shadow of catastrophe, Markiyan Kamysh writes with all of youth’s wayward lyricism, like a nuclear Kerouac." —Rob Doyle, author of Threshold

A rare portrait of the dystopian reality of Chornobyl, Ukraine, as it was before the Russian occupation of 2022.

Since the nuclear disaster in April 1986, Chornobyl remains a toxic, forbidden wasteland. As with all dangerous places, it attracts a wild assortment of adventurers who feel called to climb over the barbed wire illegally and witness the aftermath for themselves. Breaking the law here is a pilgrimage: a defiant, sacred experience.

In Stalking the Atomic City, Kamysh tells us about thieves who hide in the abandoned buildings, the policemen who chase them, and the romantic utopists who have built families here, even as deadly toxic waste lingers in the buildings, playgrounds, and streams. The book is complete with stunning photographs that may well be the last images to capture Chornobyl’s desolate beauty since occupying Russian forces started to loot and destroy the site in March 2022.

An extraordinary guide to this alien world many of us will never see, Kamysh’s singular prose that is both brash and bold, compared to Kerouac and gonzo journalists, captures the understated elegance and timeless significance of this dystopian reality.