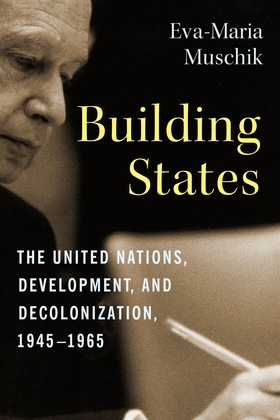 Postwar multilateral cooperation is often viewed as an attempt to overcome the limitations of the nation-state system. However, in 1945, when the United Nations was founded, large parts of the world were still under imperial control. Building States investigates how the UN tried to manage the dissolution of European empires in the 1950s and 1960s—and helped transform the practice of international development and the meaning of state sovereignty in the process.

Eva-Maria Muschik argues that the UN played a key role in the global proliferation and reinvention of the nation-state in the postwar era, as newly independent states came to rely on international assistance. Drawing on previously untapped primary sources, she traces how UN personnel—usually in close consultation with Western officials—sought to manage decolonization peacefully through international development assistance. Examining initiatives in Libya, Somaliland, Bolivia, the Congo, and New York, Muschik shows how the UN pioneered a new understanding and practice of state building, presented as a technical challenge for international experts rather than a political process. UN officials increasingly took on public-policy functions, despite the organization’s mandate not to interfere in the domestic affairs of its member states. These initiatives, Muschik suggests, had lasting effects on international development practice, peacekeeping, and post-conflict territorial administration.

Casting new light on how international organizations became major players in the governance of developing countries, Building States has significant implications for the histories of decolonization, the Cold War, and international development.