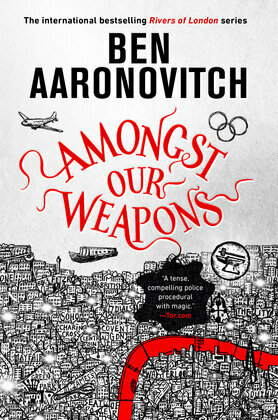 The ninth novel of the bestselling Rivers of London urban fantasy series returns to the adventures of Peter Grant, detective and apprentice wizard, as he solves magical crimes in the city of London.

There is a world hidden underneath this great city.

The London Silver Vaults—for well over a century, the largest collection of silver for sale in the world. It has more locks than the Bank of England and more cameras than a paparazzi convention.

Not somewhere you can murder someone and vanish without a trace—only that’s what happened.

The disappearing act, the reports of a blinding flash of light, and memory loss amongst the witnesses all make this a case for Detective Constable Peter Grant and the Special Assessment Unit.

Alongside their boss DCI Thomas Nightingale, the SAU find themselves embroiled in a mystery that encompasses London’s tangled history, foreign lands and, most terrifying of all, the North!

And Peter must solve this case soon, because back home his partner Beverley is expecting twins any day now. But what he doesn’t know is that he’s about to encounter something—and somebody—that nobody ever expects…

Effortlessly original, endlessly inventive and hugely entertaining—step into the world of the much-loved, bestselling Rivers of London series.