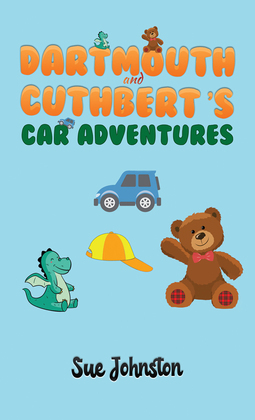 Dartmouth is a 7-year-old brown teddy bear. He is rather grumpy, very wise and knows a lot. Cuthbert is Dartmouth’s friend. He is a 4-year-old green dragon. He is very lively and rushes about everywhere. His breath is only just warm as he is a baby, but his tail flicks about all over the place! He loves telling jokes to Dartmouth.

They sit on the front passenger seat with the seat belt on when Mum takes her twin boys to school in the car. Oliver and Lewis are 5 years old and identical. They can’t sit in front as Mum wouldn’t know which is which, and they would argue a lot about whose turn it is.

The boys’ favourite soft toys Dartmouth and Cuthbert (known to each other as Squeezums and Fishooks), sit next to Mum with Oliver and Lewis in the back. Dad works in London during the week, so doesn’t know about the furry friends’ adventures.