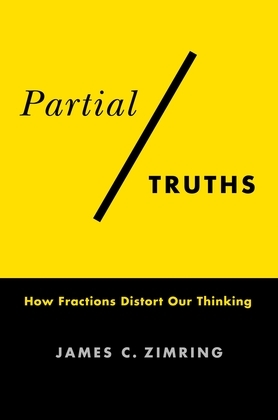 How Fractions Distort Our Thinking
by James C. Zimring (Author)
Excerpt
Nonfiction Science and technics Science Mathematics Probability & statistics Medical Health risk assessment
warning_amber
One or more licenses for this book have been acquired by your organisation details
EPUB
Unlimited loans, One at a time
Details

A fast-food chain once tried to compete with McDonald’s quarter-pounder by introducing a third-pound hamburger—only for it to flop when consumers thought a third pound was less than a quarter pound because three is less than four. Separately, a rash of suicides by teenagers who played Dungeons and Dragons caused a panic in parents and the media. They thought D&D was causing teenage suicides—when in fact teenage D&D players died by suicide at a much lower rate than the national average. Errors of this type can be found from antiquity to the present, from the Peloponnesian War to the COVID-19 pandemic. How and why do we keep falling into these traps?

James C. Zimring argues that many of the mistakes that the human mind consistently makes boil down to misperceiving fractions. We see slews of statistics that are essentially fractions, such as percentages, probabilities, frequencies, and rates, and we tend to misinterpret them. Sometimes bad actors manipulate us by cherry-picking data or distorting how information is presented; other times, sloppy communicators inadvertently mislead us. In many cases, we fool ourselves and have only our own minds to blame. Zimring also explores the counterintuitive reason that these flaws might benefit us, demonstrating that individual error can be highly advantageous to problem solving by groups. Blending key scientific research in cognitive psychology with accessible real-life examples, Partial Truths helps readers spot the fallacies lurking in everyday information, from politics to the criminal justice system, from religion to science, from business strategies to New Age culture.