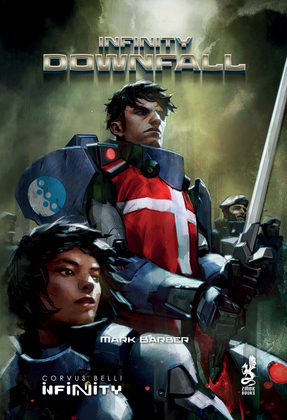 Sub Officer Kyle Hawkins is two days out of his training as a Knight Hospitaller when he is sent to the jungle planet of Paradiso. After four years of gruelling training as a warrior of the NeoVatican, criticised by his superiors for his liberal, pacifistic theological views, he volunteers for the Paradiso assignment in an attempt to prove his worth. However, after arriving he finds that it is little more than a simple security detail, attached to a platoon of Fusiliers of the PanOceanian Light Infantry, guarding a sleepy MagnaObra research facility not far from the border of Yujingyu territory known as Alpha Four Four. The platoon Hawkins works alongside is led by Lieutenant Priya Shankar, a driven, serious minded officer whose professionalism makes her popular with her seniors, but seemingly cold and unapproachable to the soldiers under her command. Experienced with peacekeeping, disaster relief operations and ceremonial guard duties, Shankar has done everything expected of a Fusilier officer - except actual combat.