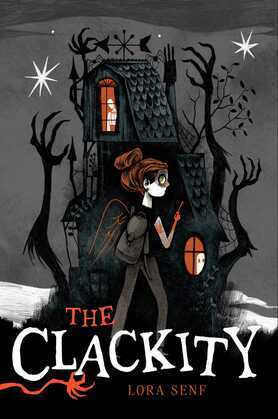 Reminiscent of Doll Bones, this deliciously eerie middle grade novel tells the story of a girl who must enter a world of ghosts, witches, and monsters to play a game with deadly consequences and rescue her aunt.

Evie Von Rathe lives in Blight Harbor—the seventh-most haunted town in America—with her Aunt Desdemona, the local paranormal expert. Des doesn’t have many rules except one: Stay out of the abandoned slaughterhouse at the edge of town. But when her aunt disappears into the building, Evie goes searching for her.

There she meets The Clackity, a creature who lives in the shadows and seams of the slaughterhouse. The Clackity makes a deal with Evie to help get Des back in exchange for the ghost of John Jeffrey Pope, a serial killer who stalked Blight Harbor a hundred years earlier. Evie must embark on a journey into a strange otherworld filled with hungry witches, penny-eyed ghosts, and a memory-thief, all while being pursued by a dead man whose only goal is to add Evie to his collection of lost souls.