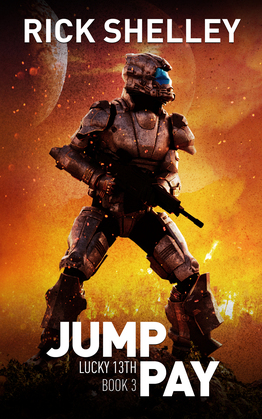 Rick Shelley concludes his military sci-fi trilogy following the exploits of the Lucky 13th Spaceborne Assault Team as they undertake a daring strike aimed at the heart of the enemy.

The ongoing three-sided war among the Schlinal Hegemony, the Dogel Worlds, and the Accord of Free Worlds has worn down all the combatants. Even as the most recent entrant to the hostilities, the Accord is already running out of men and material. And now the Hegemony is forming up for another offensive. The time has come for desperate measures.

Deep in Schlinal Hegemony space lies the planet Tamkailo. It is a world not meant for humans, with low oxygen levels and surface temperatures close to the boiling point. Simply surviving in such an environment is unlikely, let alone waging war. But that is where Sgt. Joe “The Bear” Baerclau and Lucky 13th are headed.

Because the Hegemony is not only using Tamkailo as a staging point for their offensive. The planet is one of their biggest armories, holding weapons of war that could wipe out the Accord. It’s up to the 13th to destroy it. Outgunned and outmanned, the very survival of freedom in the galaxy is now in their battle-scarred hands…