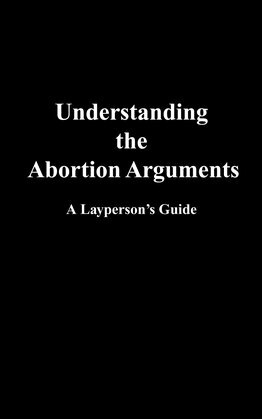 A Layperson's Guide
by Dave Evans (Author)
Excerpt
Nonfiction Health & fitness Daily living Social science Social work
warning_amber
One or more licenses for this book have been acquired by your organisation details
EPUB
Unlimited loans, One at a time
Details

When a human male and a human female come together sexually, it is possible, depending on the period in the woman's menstrual cycle, that one of the male's sperm will fertilize the woman's egg and a zygote will be produced. This zygote clearly isn't feline, canine, bovine, or anything other than human. This FACT is undeniable.

However, when the woman discovers she is pregnant, or at some later time in the pregnancy, she may, for whatever reason, want the developing embryo or foetus to be aborted. As this will inevitably lead to the destruction of something that is both alive and human, there are moral and legal questions that need to be addressed, the most significant being: What VALUE ought to be accorded to the embryo/foetus when compared to the pregnant woman's RIGHT to choose?

Some so-called pro-life campaigners, often sighting the authority of the Bible, are doing everything they can to make all abortion illegal at any stage in a pregnancy. However, other Christian groups are opposed 'to any legislative, executive or judicial action on the part of local, state or national governments that abridges the right of a woman to reach an informed decision about the termination of pregnancy or that would limit the access of a woman to safe means of acting on her decision.' In addition, groups such as the United Nations are urging governments across the world to decriminalise the procedure.

With entrenched beliefs and opinions on either side of the argument, it is often difficult to understand the relevant factors involved in the argument. This book, written specifically for the interested layperson, sets out to clearly explain the religious and moral arguments against abortion and why they do not stand up to close scrutiny.