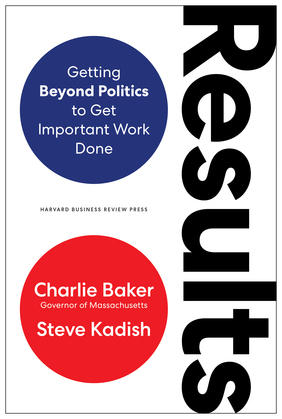 A Leader's Guide to Executing Change and Delivering Results.

Governor Charlie Baker, one of the most popular governors in the United States, with a reputation for getting things done, wants to put the service back into public service: "Wedge issues may be great for making headlines," he writes, "but they do not move us forward. Success is measured by what we accomplish together. Our obligation to the people we serve is too important to place politics and partisanship before progress and results."

For the Governor and his longtime associate Steve Kadish, these words are much more than political platitudes. They are at the heart of a method for delivering results—and getting past politics—the two developed while working together in top leadership positions in the public and private sectors.

Distilled into a four-step framework, Results is the much-needed implementation guide for anyone in public service, as well as for leaders and managers in large organizations hamstrung by bureaucracy and politics. With a broad range of examples, Baker, a Republican, and Kadish, a Democrat, show how to move from identifying problems to achieving results in a way that bridges divides instead of exacerbating them. They show how government can be an engine of positive change and an example of effective operation, not just a hopeless bureaucracy.

Results is not only about getting things done, but about renewing people's faith in public service. Empty promises feed disengagement when instead we need confidence in our government and the services it delivers. When a mob attacked the US Capitol Building on January 6, 2021, the very core of our democracy and our sense of government were threatened. Demonstrating that government can work—the goal of this book—is vital to ensuring the future of our democracy.