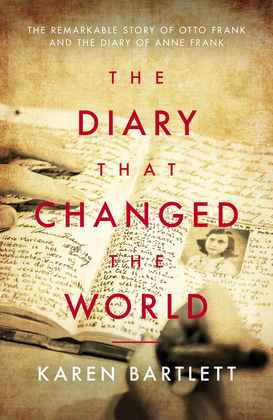 The Diary That Changed the World

The Remarkable Story of Otto Frank and the Diary of Anne Frank
by Karen Bartlett (Author)
Excerpt
Nonfiction History Holocaust World War II
warning_amber
One or more licenses for this book have been acquired by your organisation details
EPUB
Unlimited loans, One at a time
Details

“A meticulous account of the fascinating, convoluted and sometimes ugly publishing history of the world’s most famous diary. Karen Bartlett’s book is all the more relevant at a time of untruths and fake news.” – Caroline Moorehead, bestselling author of Village of Secrets: Defying the Nazis in Vichy France

When Otto Frank unwrapped his daughter’s diary with trembling hands and began to read the first pages, he discovered a side to Anne that was as much a revelation to him as it would be to the rest of the world.

Little did Otto know he was about to create an icon recognised the world over for her bravery, sometimes brutal teenage honesty and determination to see beauty even where its light was most hidden.

Nor did he realise that publication would spark a bitter battle that would embroil him in years of legal contest and eventually drive him to a nervous breakdown and a new life in Switzerland. Today, more than seventy-five years after Anne’s death, the diary is at the centre of a multi-million-pound industry, with competing foundations, cultural critics and former friends and relatives fighting for the right to control it.

In this insightful and wide-ranging account, Karen Bartlett tells the full story of The Diary of Anne Frank, the highly controversial part it played in twentieth-century history, and its fundamental role in shaping our understanding of the Holocaust.

At the same time, she sheds new light on the life and character of Otto Frank, the complex, driven and deeply human figure who lived in the shadows of the terrible events that robbed him of his family, while he painstakingly crafted and controlled his daughter’s story.