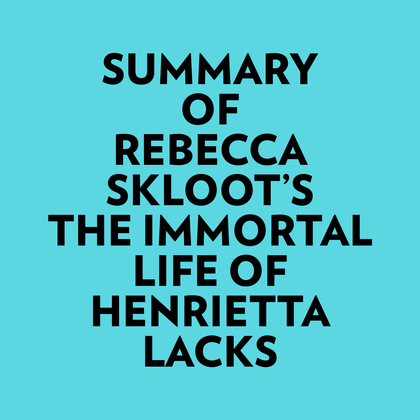 Summary of Rebecca Skloot's The Immortal Life of Henrietta Lacks

Please note:This audiobook has been generated using AI Voice. This is a companion version & not the original book.

#1 On January 29, 1951, David Lacks sat behind the wheel of his old Buick, watching the rain fall. He was parked under a towering oak tree outside Johns Hopkins Hospital with three of his children—two still in diapers—waiting for their mother, Henrietta. She had been telling her closest friends something was wrong with her sex life, but she still said no when she was pregnant with Joe, her fifth child.

#2 Henrietta was diagnosed with a tumor on her cervix, but when she went to the hospital, she was treated for syphilis. She had six children with her husband, and she was never able to travel. She was asymptomatic neuro syphilitic, and her husband had no liking for sexual intercourse.

#3 Henrietta was a prime example of how little black patients knew about their health. She had never heard of cervical cancer, and when she went to the hospital, she was sent home with a diagnosis of no abnormality of the cervix. Three months later, she had a full-blown tumor.