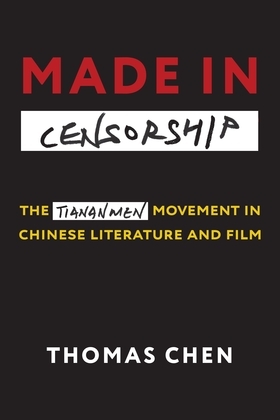 The Tiananmen Movement in Chinese Literature and Film
by Thomas Chen (Author)
Excerpt
Nonfiction History History by country Asia China Literary essays Arts Film & video History & criticism
warning_amber
One or more licenses for this book have been acquired by your organisation details
EPUB
Unlimited loans, One at a time
Details

The violent suppression of the 1989 Tiananmen Square demonstrations is thought to be contemporary China’s most taboo subject. Yet despite sweeping censorship, Chinese culture continues to engage with the history, meaning, and memory of the Tiananmen movement. Made in Censorship examines the surprisingly rich corpus of Tiananmen literature and film produced in mainland China since 1989, both officially sanctioned and unauthorized, contending that censorship does not simply forbid—it also shapes what is created.

Thomas Chen explores a wide range of works made despite and through censorship, including state propaganda, underground films, and controversial best-sellers. Moving across media, from print to the internet, TV to DVD, fiction to documentary, he shows the effects of state intervention on artistic production and consumption. Chen considers art at the edge of censorship, reading such disparate works as a queer love story shot without permission that found official release on DVD, an officially sanctioned film that was ultimately not permitted to be released, a novel built on orthographic elisions that was banned and eventually reissued, and an internet narrative set during the SARS epidemic later published with alterations. He also connects Tiananmen with the story of COVID-19 in China and considers the implications for debates about the reach and power of the Chinese state in the public realm, both domestic and abroad. A bold rethinking of contemporary Chinese literature and film, this book upends understandings of censorship, uncovering not just what it suppresses but also what it produces.