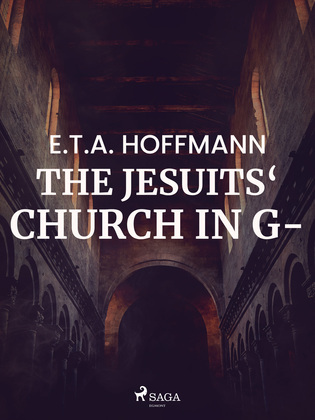 The Jesuits‘ Church in G-

‘The Jesuits’ Church in G‘ (1844) was written by the German Romantic author E. T. A. Hoffmann, most famous for his novella ‘The Nutcracker and the Mouse King’ (1816) which inspired Tchaikovsky’s ballet ‘The Nutcracker’.
The story first appeared in the ‘Night Pieces’ collection, published in 1816 by The Georg Reimer publishing house in Berlin.
Taken "from the papers of a traveling enthusiast’, it tells the story of the creative power of the visual artist Berthold. This classic short story is perfect for fans of horror and fantasy fiction and the authors H. P. Lovecraft and Neil Gaiman.

Ernst Theodor Wilhelm Hoffmann (1776-1822), better known as E. T. A. Hoffmann, was a German Romantic author of fantasy and gothic horror. He was also a composer, music critic, draftsman and caricaturist.
Hoffmann's stories inspired several famous operatic composers, including Richard Wagner, Jacques Offenbach and Léo Delibes. He is also the author of the novella ‘The Nutcracker and the Mouse King’, on which Tchaikovsky’s famous ballet, ‘The Nutcracker’ is based. The story also inspired the film ‘The Nutcracker and the Four Realms’ (2018), starring Keira Knightley, Morgan Freeman, Helen Mirren.