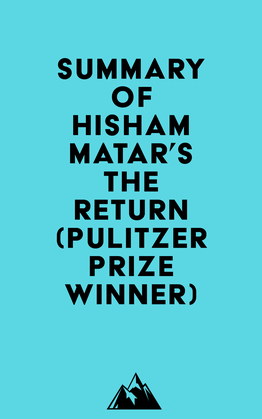 #1 I had considered never returning to Libya in 2011. I was in New York, walking up Broadway, when the proposition presented itself. It seemed perfect, a thought my mind had manufactured independently.

#2 I had gone to New York the previous month to lecture on novels about exile and estrangement. But I had an older connection to the city. My parents had moved to Manhattan in the spring of 1970, when my father was appointed first secretary in the Libyan Mission to the United Nations.

#3 Qaddafi’s campaign to hunt down exiled critics extended to the families of dissidents. My only sibling, Ziad, was fifteen when he went off to boarding school in Switzerland. A few weeks later, mid-way through term, he returned to Cairo. He was called to the school’s office telephone and told to leave immediately and take the first train to Basle.

#4 When I was twelve, I needed to see an eye specialist. Mother put me on a plane and I flew alone from Cairo to Geneva, where Father was to meet me. He and I spoke on the telephone before I left for the airport. If for any reason you don’t see me in arrivals, go to the information desk and ask them to call out this name, he said.