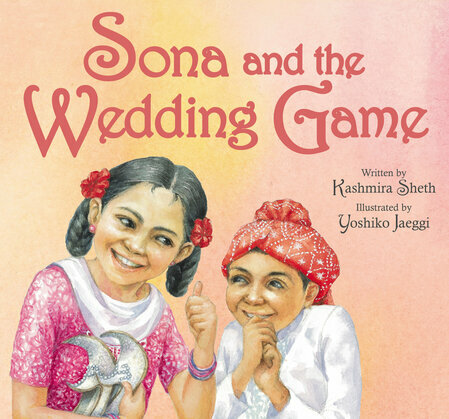 Sona and the Wedding Game

Experience the magic of an Indian wedding in story about a girl playing a fun, traditional game on her sister’s wedding day.

Sona's big sister Nisha is getting married and Sona has been given an important job. She has to steal the groom's shoes. Her grandmother tells her that this tradition is intended to help the bride's and groom's families get to know each other. If Sona is successful, Anil-ji will have to bargain with her to get his shoes back and she can ask for a special reward.

Sona has never attended a wedding before, so she's unfamiliar with this Indian tradition-as well as many of the other magical experiences that will occur before and during the special event. There's so much to do: making garlands and rangoli designs to decorate their home, welcoming relatives from India, and helping Nisha-ben get ready. And there are so many exciting things happening: an artist draws patterns on the hands of the girls and women at a mehndi party, Dadima fancy braids Sona’s hair—and  the groom arrives on a white horse!

Still, Sona can't stop worrying about how she will steal Anil-ji's shoes. Fortunately her know-it-all cousin Vishal, who has arrived from India, is available to help Sona come up with a plan.

In an author's note, Kashmira Sheth describes her childhood experiences attending weddings in India (she never got to steal the shoes!) and explains the significance of the Hindu customs and rituals described in the story.