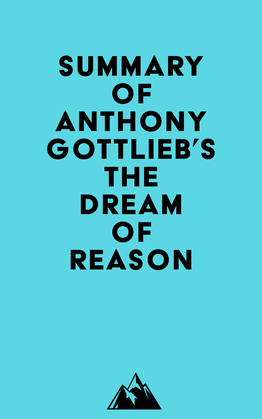 Summary of Anthony Gottlieb's The Dream of Reason

#1 The place-names on the academic maps of philosophy tend to change. In the Middle Ages, for example, philosophy covered practically every branch of theoretical knowledge that did not come under theology.

#2 The history of philosophy is the history of a sharply inquisitive cast of mind. It is not a defined discipline, but rather a collection of different inquiries that have been adopted by other disciplines.

#3 The attempt to push rational inquiry to its limits is often bound to fail, and then the dream of reason which motivates philosophical thinking seems like a mirage. At other times, though, it succeeds magnificently, and the dream is revealed as a fruitful inspiration.

#4 The first philosophers were showmen who performed poetry and prose readings in public. They attracted passing audiences, devoted followers, and sometimes ridicule. The Presocratics invented the archetypes of all later philosophy.