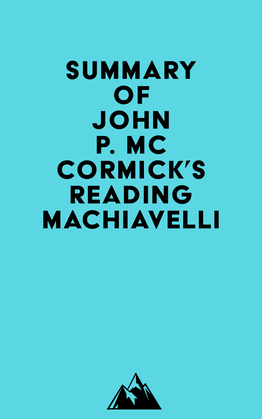 by   Everest Media (Author)
Excerpt
Nonfiction Human science Philosophy History & surveys Medieval
warning_amber
One or more licenses for this book have been acquired by your organisation details
EPUB
55 loans, One at a time
Details
EPUB
40 loans, 10 Concurrent loans
Details

#1 Machiavelli’s use of Borgia is a puzzle for interpreters of The Prince. Those who denounced the scandalous quality of Machiavelli’s book argued that the laudatory presentation of Borgia proved that he cared little for piety, morality, good government, or basic decency.

#2 Machiavelli argues that the people are the greatest authority in a state, and he believes that they should be the ones who decide who holds power. He associates himself with Cesare Borgia, who was called Duke Valentino by the people, and with the common people as a class.

#4 The Italian tradition, represented by Dante, recognizes the Roman Caesars as the heirs of Alexander. The question of whether Cesare Borgia is capable of maintaining and building upon the foundations he inherits from his Alexander is central to The Prince.