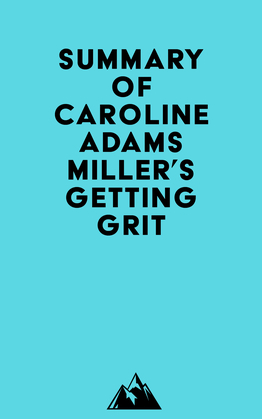 by   Everest Media (Author)
Excerpt
Nonfiction Human science Psychology Developmental
warning_amber
One or more licenses for this book have been acquired by your organisation details
EPUB
55 loans, One at a time
Details
EPUB
40 loans, 10 Concurrent loans
Details

#1 The Scripps National Spelling Bee is a popular nationwide contest open to students as young as six and as old as fourteen, hundreds of whom descend on the city after winning regional bees in their state.

#2 Duckworth’s research found that the Grit Scale was a better predictor of who would make it to the finals of the Bee than previously used measures such as the Whole Candidate Score.

#3 Duckworth’s research has found that there are commonalities among successful people who have overcome many challenges to sustain the pursuit of something important to them. They are lit up by a cause or activity that energizes them, they are not just resilient in the short run, and they have long-term goals that are difficult to achieve.

#4 The Grit Scale is a test that measures a unique, coveted quality that separates those who want to succeed at difficult goals from those who actually do it. It is not related to the qualities associated with being gritty, but rather it is dutiful and disciplined pursuit of a goal.