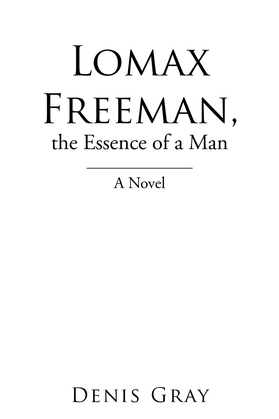 Lomax Freeman, the Essence of a Man

A Novel
by Denis Gray (Author)
Excerpt
Nonfiction Health & fitness Daily living Fiction
warning_amber
One or more licenses for this book have been acquired by your organisation details
EPUB
Unlimited loans, One at a time
Details

Lomax Freeman, a homeless man, lives in a box in Upper West Side of Manhattan. Steven Hart, who works for the New York Times, rents in the Kensington building. Lomax’s box sits outside that apartment. After living in that apartment for a short period, Steve experiences a black man who’s intelligent, sophisticated, kind, and gentle. He wonders how Lomax landed on the streets of New York homeless. He wishes to do a two-part series on Lomax. Once the paper green-lights the feature, Lomax agrees to do the article but with one condition: the tragedy that befell him is off-limits. Eventually, Steve violates the agreement when he, secretively, uncovers Lomax’s full name. Now, the question becomes, Should he include it in the article to expose Lomax’s privacy? Doesn’t he have family, someone from the past who’s in search of Lomax Emmanuel Freeman? Steve’s in a dilemma.