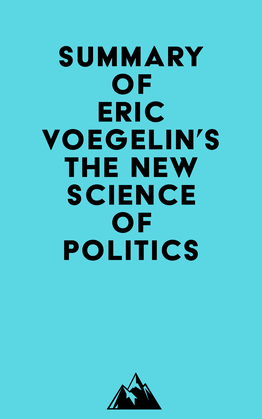 Summary of Eric Voegelin's The New Science of Politics

by   Everest Media (Author)
Excerpt
Nonfiction Social science Political science History & theory
warning_amber
One or more licenses for this book have been acquired by your organisation details
EPUB
55 loans, One at a time
Details
EPUB
40 loans, 10 Concurrent loans
Details

#1 Political science is suffering from a difficulty that stems from its very nature as a science of man in historical existence. For man does not wait for science to explain to him what his life is about, and when the theorist approaches social reality, he finds it pre-empted by society’s self-interpretation.

#2 When a theorist reflects on his own theoretical situation, he finds himself faced with two sets of symbols: the language symbols produced as an integral part of the social cosmion in the process of its self-illumination, and the language symbols of political science.

#3 The task of defining and clarifying the symbols of a political party is not simple if the inquiry is conducted according to critical standards. The criteria used in the process of clarification must be well defined, and the cognitive value of the resulting concepts must be tested by placing them in larger theoretical contexts.

#4 A political society is a cosmion illuminated from within. It can dissolve not only through the disintegration of the beliefs that make it an acting unit in history, but also through the dispersion of its members in such a manner that communication between them becomes physically impossible.