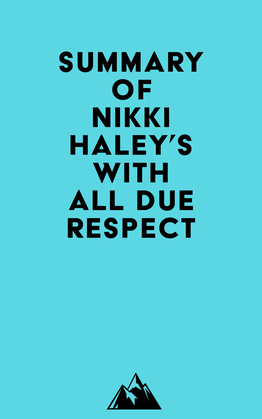 Summary of Nikki Haley's With All Due Respect

by   Everest Media (Author)
Excerpt
Nonfiction Social science Political science Government
warning_amber
One or more licenses for this book have been acquired by your organisation details
EPUB
55 loans, One at a time
Details
EPUB
40 loans, 10 Concurrent loans
Details

#1 I’ve never said the Charleston killer’s name out loud. I can’t imagine how it torments the families of the victims. I know it never left me. I called Senator Pinckney, who was a Democrat from a rural area in Jasper County, to get his voice mail.

#2 I was called to help with the investigation into the shooting of Senator Clementa Pinckney and his congregation at Mother Emanuel Church in Charleston, South Carolina. I was informed that the shooter was believed to be a white man with a bowl haircut who had entered the church the night before at 8:17 p. m. and left, gun in hand, at 9:07 p.

#3 The apprehension of the suspect was announced at a press conference, and I addressed the people of South Carolina. I was angry and disappointed with myself, as I had lost control of my emotions. My press aides told me that anyone would have the same reaction.

#4 The press conference I held after the shooting was just the beginning. The streets of Charleston were soon filled with media tents, cameras, and communications equipment.