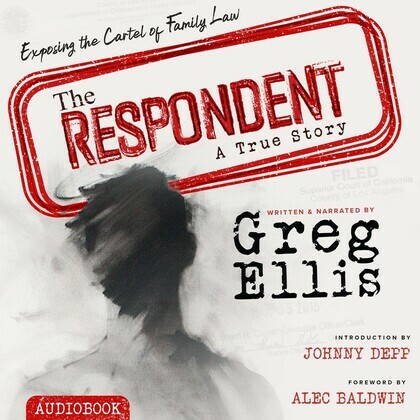 With The Respondent: Exposing the Cartel of Family Law, Hollywood veteran Greg Ellis delivers a gripping, unvarnished first-person account of family breakdown and the social, political, and legal forces that are fueling this national health emergency. It further exposes and condemns a gender bias that presumes that fathers are less effective caregivers.

Family breakdown is the single greatest threat to American society. Every day, more than four thousand children lose a parent because of our archaic and inhumane family-court system. Every day, ten divorced men commit suicide. And now, one in three children in our country are without their father.

The Respondent is Ellis’s personal story about a Hollywood dream razed by internal and external forces. Part memoir, part meditation, and part manifesto, it’s a timely and heartrending portrait of perhaps the most misunderstood aspect of the American legal system. Through its candor and moral strength, The Respondent offers guidance and hope. As such, it’s an indispensable read for not only parents enduring the grief of child separation, but all interested in learning about the gross overreach and unrelenting brutality of family law.