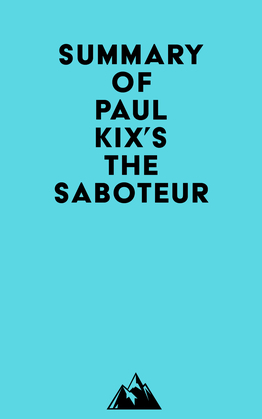 Summary of Paul Kix's The Saboteur

by   Everest Media (Author)
Excerpt
Nonfiction History History by country Europe Germany
warning_amber
One or more licenses for this book have been acquired by your organisation details
EPUB
55 loans, One at a time
Details
EPUB
40 loans, 10 Concurrent loans
Details

#1 On May 16, 1940, the German army broke through the Allied lines south of Belgium, and began their push to the English Channel. The Allies had thought that the terrain was too dangerous for a Nazi offensive, but the Germans had chosen it anyway.

#2 The La Rochefoucauld family was driving out of the Nazis’ path in northwestern France that day. They saw around them cars with mattresses tied to their roofs as protection from errant bombs. But Robert watched as those mattresses served a more natural purpose when the traffic forced people to camp on that first night.

#3 The La Rochefoucauld family was forced to flee their home during the German invasion of France. They traveled to a field near a highway, where they spent the night with other refugees. Robert felt a sense of fraternity with the people around him, and he wanted to honor France and defend it.

#4 The Battle for France was the largest exodus in history. The roads were so congested with people trying to escape the war that bicycles were the best mode of travel.