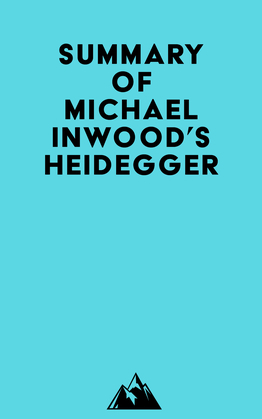 #1 Heidegger was a German philosopher who lived from 1889 to 1976. He was a priest when he first began studying philosophy, but he was discharged from the priesthood within a month due to heart trouble. He then entered Freiburg University and studied theology and scholastic philosophy.

#2 Heidegger’s academic career was interrupted by World War I. In 1915 he was conscripted, but regarded as unsuitable for combat duties and assigned to the postal and meteorological services. In 1917 he married a Protestant, Elfriede Petri, and announced his breach with the system of Catholicism.

#3 He moved to Marburg in 1923 and began an enduring relationship with Hannah Arendt. He published his great work, Being and Time, in the Yearbook for Philosophy and Phenomenological Research, edited by Husserl, in 1927.

#4 Heidegger was a German philosopher who taught at Freiburg University. He was deeply attached to the provincial life of southern Germany, and he disliked big cities. He lectured on the German idealists Schelling and Hegel, the allegory of the cave in Plato's Republic, and the Presocratic philosophers Anaximander and Parmenides.