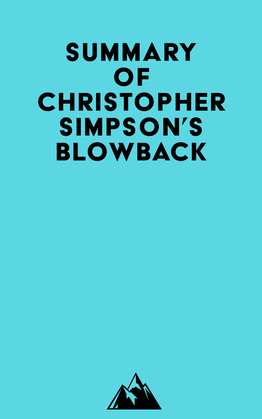 by   Everest Media (Author)
Excerpt
Nonfiction History History by country United States
warning_amber
One or more licenses for this book have been acquired by your organisation details
EPUB
55 loans, One at a time
Details
EPUB
40 loans, 10 Concurrent loans
Details

#1 The American anticipation of a new war between the United States and the USSR was reinforced by the balance of forces in Europe in the 1950s. The Soviets’ advantage in troop strength and geographical position gave it powerful leverage in Eastern Europe.

#2 The use of Nazis and collaborators in intelligence programs has left a mark on life in the United States itself. The existence of these programs has been a carefully kept secret in the West.

#3 The American government initially planned to enlist the brains of Nazi Germany, but they soon stopped beating a dead Nazi horse. They began importing German chemical warfare experts, submarine specialists, and the scientists who had once built Germany’s rockets using slave labor from Nazi concentration camps.

#4 The Gehlen organization was funded by the American military to track Soviet military threats in Europe, and they often exaggerated the threat in order to receive more funding. The German intelligence group was used to track Communists.